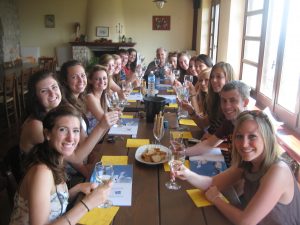 As I’m sitting here, trying to think of what exactly to write, how to explain the great experiences I had on the Greece study abroad trip in 2011, I keep looking at a shelf in my living room bookcase. A shelf that has a picture of the Acropolis I took our last day in Athens, some small replicas of pottery I acquired on the trip, the photo book I made upon our return, and the first two bottles of wine I ever bought, which are from a winery we stopped at in Nemea. Each object has a story that goes along with it, but no single story makes up all of my experience of traveling in Greece. So, rather than trying to summarize the whole experience and what it meant for me, here are a few things I experienced and learned.

Our trip was a wonderful mix of the ancient world and the modern one, where we (almost) got used to walking by several thousand year old ruins as we made our way around Athens. On the way back from Delphi, our bus got stuck in traffic caused by a march the Communist party was leading. After we spent some time in Sparta, a few of us watched the movie 300 together one afternoon, to see just how much they got wrong (spoilers: almost everything).

There was culture shock and pleasant surprises– dogs and cats wandering the streets who followed after us, accidentally responding in Spanish instead of Greek because my brain knew I shouldn’t say English words but got too nervous to remember the correct response in Greek, visiting an outdoor market where we found beautiful fresh fruit and discovered what a skinned lamb looked like (not appetizing, it turns out). I had visited other countries before our study abroad trip, but I had never stayed in one place long enough to get familiar with the major streets and routes or to have a favorite lunch place in another country (gyros for 2 Euros is hard to beat!). We made friends with one another quickly; we pretended not to hear when Professor Beneker suggested we turn back from climbing up the Acro-Corinth in a thunderstorm, which led to hilarity and a very soggy bus ride. 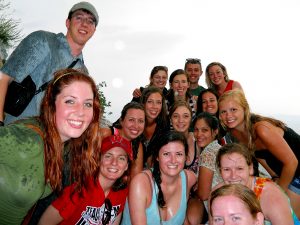 We learned about ancient Greece, about modern Greece, and a bit of how we got from one to the other. At the Acropolis Museum, we heard the other side of the Elgin Marbles story– what it’s like to have a national treasure inaccessible due to colonial mindsets and geopolitics. We saw the beauty of the Athenian agora and graffiti on the walls just outside of it. We experienced and saw, rather than just reading about the danger of having a single story of a place and people. We experienced a richness of culture and tradition, as well as the tension that comes from economic and governmental instability.

Going to Greece was my first experience out of the country as an adult and was a great way for me to learn more about myself. I became the de facto navigator for our small group that would go off exploring. I adapted to being in a huge city so well that I didn’t even flinch when a car flew by just a foot from where I was walking on our way to the airport. As a notoriously picky eater, I learned to embrace the adventure of not always been quite sure what it was I had for dinner. And this trip started a chain reaction of sorts: I realized on the trip I wanted to learn more about the classical world, which led me to add a Classics major on top of my English major, which led to me reading a lot of Greek, which helped lead me to seminary, which prepared me for my current work as a pastor. 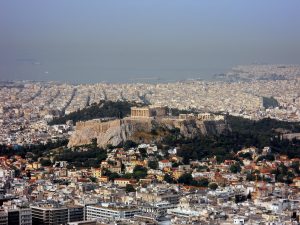 For those of you going to Greece in 2019, I hope you have as full and rich an experience as I did in 2011. Take plenty of pictures, but don’t spend the whole trip looking at things through the screen on your phone. Wear sunscreen– Greece is a lot closer to the equator than Wisconsin. Do the reading– getting background and context makes the experience so much richer. Explore the places you stay in (but go in groups) – wander the streets a bit, see where regular people spend their time, try a dish at dinner you’ve never heard of before. Ask all the questions you have, keep an open mind, and have fun!